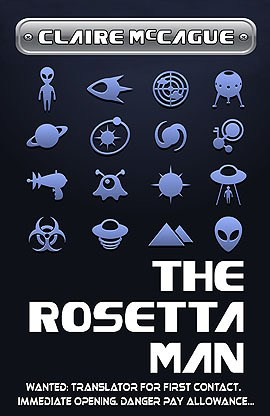 The Rosetta Man by Claire McCague
Publisher: Edge-Lite, 2015
Rating: 4 stars out of 5
The Rosetta Man is an intriguing alien first contact novel–with non-verbal aliens. The story starts out in New Zealand, but soon travels. Every nation desperately wants control over the aliens and since Estlin (an empath who’s mental shininess often attracts small animals) is the only one who can communicate, he gets dragged everywhere along with them. I enjoyed the international aspect of the story. Though the main character is Canadian, there are characters from New Zealand, China, America, Indonesia and Samoa among others. I found the novel to be very well-researched with lots of small details that gave the story authenticity. (Though most of the math–okay, all of the math–was over my head…) The intrigue of who would get control of the aliens and the mystery of what the aliens themselves wanted kept me turning pages past midnight.
Quibble: One of the subplots involved a Greenpeace ship and was told from the point of view of marine biologist, Jeannette. Since Jeannette had a past romantic connection with Estlin, when their paths finally crossed after hundred pages, I expected more to happen. Not necessarily a rekindling of the romance but perhaps an epiphany or realization related to either’s character arc.

Nicole Luiken is the author of thirteen published books for young adults, including Violet Eyes and its sequels Silver Eyes, Angel Eyes and Golden Eyes, Frost, Unlocking the Doors, The Catalyst, Escape to the Overworld, Dreamfire and the sequel Dreamline. Her latest release is In Truth & Ashes, book three of Otherselves. She also has an adult thriller, Running on Instinct, under the name N.M. Luiken and a fantasy romance series, Gate to Kandrith and Soul of Kandrith.

Nicole lives with her family in Edmonton, AB. It is physically impossible for her to go more than three days in a row without writing. Nicole Luiken wrote her first book at age 13 and never stopped.

Nicole wrote her first book at age 13 and never stopped, and she also published in On Spec’s first youth issue.